Difference between revisions of "Gameplay"

King Arthur's Gold is a team based sidescroller, in which there is combat, building and mining. The core of the game is two teams pitted against each other in a battle. The official game modes, or more essentially, types of battle are Capture the Flag and the now less popular Gold Hunt.

Capture the flag is a gamemode in which team Red and team Blue try to capture the enemy flag and return it to their own tent. The flag is perched atop the tent, and the tent is usually covered in defenses. At the beginning of a game, players will have time to build defenses before the assault begins. During this preparation phase, Builders can receive stone and wood refills by returning to the tent, and a large red barrier blocks players from accessing the center of the map.

In capture the flag mode, each class serves their own purpose. Generally the builder builds defenses around the tent and helps others to destroy or surpass enemy defenses. The knight is the front line soldier, preventing the enemy from breaching the knight's team defenses, while pressing onward towards the flag. The archer supports the knight by forcing the enemy to shield with arrows.

Capture the flag requires some thought and strategy (if you want to win that is).

This game mode puts the teams in a race to gather the most gold. A team becomes victorious by gathering a set amount of gold before the opponent. Digging for gold is not the only victorious plan, players can also steal their way to victory. Gold can be stored in sacks in this mode.
currently in build 281 gold hunt does not work

This is a custom game mode with 0 unit limit (meaning players do not respawn after they die) and the only available classes being knight and archer. Each round is played until one team kills the other.

A half blue, half red tent, to show both colors.

The tent is often the most valued asset in the game, being the gold storage in Gold Hunt mode, and the place of the invaluable flag in CTF mode. Before a game starts or before there are enough players, the tent serves as an infinite resupply center. Once the game starts, the tent will still function so, but for that the player must cycle through classes to their own again. This leads us to the tent's final purpose; as a class changing station. The player can cycle through the classes by pressing the E key. Builders can obtain free resources (Wood and Stone) passing the Tent in warmup time.

As of the "Zombies Release"[1] update, Zombie Fortress is a gamemode in which players attempt to survive in a randomly generated world against a never-ending undead horde. The zombies live in randomly generated dungeons and underground expanses. The Single-Player Version was released on March 2nd, 2012, since the devs had to to GDC in San Francisco and wouldn't have time to finish the multiplayer version [2]. It has yet to be released. 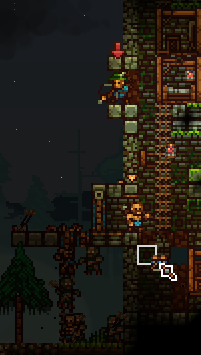 A screenshot of the new zombies game-mode. Originally posted from Blog

Griefing is a term used by many players to describe the act of hampering your own team. Whether its destroying your team's constructions, obstructing paths intended for your team, or shooting them with catapults - any intentional act that gives disadvantage to your own team is considered griefing. This also includes team swapping to harm the opposite team.
If you see any griefing, please press ESC then click chat and let the channel know. Generally a guard will be on and come assist you.