In King Arthur's Gold there is a long range of blocks. These can be broken or mined by builders -- bedrock and dirt backwall are exceptions. Knights can destroy some of the blocks with their swords (principally wood and dirt). Both Knights and Archers can use their explosives to destroy blocks -- Dirt can't be destroyed by explosives, only damaged. All blocks are affected by gravity, except bedrock and without proper support they collapse. 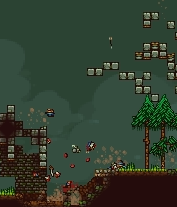